THE FESTIVAL OF BRITAIN 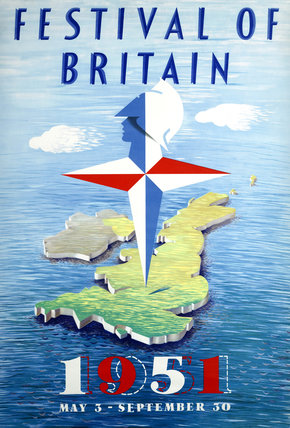 The idea of a national festival was first conceived in the dark days of the Second World War with the aim of celebrating the 100th anniversary of The Great Exhibition of 1851. With other things to consider further thoughts were shelved until 1945 when a committee was set up to investigate how a festival might assist with exports.

In 1947, with a Labour Government in power, Herbert Morrisson decided that instead of an international exhibition the Festival should showcase the arts, crafts, industry and future rebuilding of Britain. It was decided that the Festival should be non-political to cover the broadest spectrum possible, and Gerald Barry was appointed as Director General of the Festival in 1948. Barry was an ex newspaper man with an eye for detail and an empathy for what the public might find popular.

Gerald Barry, seen on the right in front of an early design for the Southbank site, set about the task of co-ordinating the many facets of the Festival with great enthusiasm. The site chosen for the main London event was on the south bank of the Thames between County Hall and Waterloo Bridge. The site was mainly composed of low-grade housing, warehousing and the Lion Brewery. It was also the site the London County Council had chosen for the construction of their new concert hall. Work started on what we now know as the Royal Festival Hall in 1949 whilst the rest of the southbank site was cleared in preparation for the construction of the pavilions that would showcase everything from the natural world to transport, and from new schools to new homes. 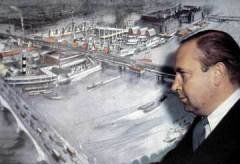 Meanwhile cities, towns and villages were planning their own Festival events which would be run during 1951. Some of these like the Exhibition of Power in Glasgow were large and would run for weeks or months, while others might hold a special pageant that would be just a one day event. An aircraft carrier, 'The Campania' was converted to a floating exhibition centre and would visit several seaports during the run of the Festival, and a fleet of lorries were readied to carry all of the components for a 'land travelling exhibition' that would visit some of the inland major towns and cities.

To provide a little light relief a 'pleasure garden' was proposed and eventually built on land at Battersea, which had been the site of the last duel fought in Britain. The Festival Pleasure Gardens contained a large funfair, a tree walk, theatres, cafes, lakes and fountains and all sorts of wonderfully colourful buildings to amuse the visitors.

The Southbank opened to visitors in May 1951 and the Festival of Britain was well and truly underway. By the time it closed in September over 8,000,000 people had marvelled at the Skylon, the Dome of Discovery, and the other futuristic pavilions. The Festival Gardens had played host to a similar number of visitors, many of them travelling from the Southbank site to Battersea on the riverbus service. Although not as popular as the Southbank both the Campania and the Land Travelling exhibitions were visited by several  hundred thousand people. The exhibitions in Scotland, Wales and Northern Ireland were all well patronised and the smaller events certainly offered a respite from the sausterity of post war Britain.

It's impossible in this short summary to give full details of all the events, pavilions and exhibitions so for further reading we would recommend you look at the Wikipedia entry for the Festival of Britain at